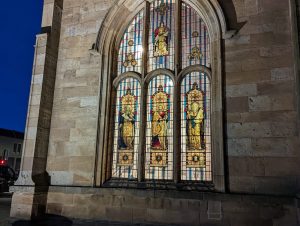 On Tuesday 01 March I sat inside Dewsbury Minster and wept, humbled by kindness, moved by selflessness, in awe of innovation and inspiration.

Mine has been an unusual life, some might say extraordinary. It has been filled with stories people wouldn’t believe if they had been written as fiction. Some good, some horrific, some exhausting, some exciting, some hilarious, and yes, some humbling. From the magnificence of a year spent in British Columbia, few years in the ski slopes of Europe, to spending two decades immersed in India, there has rarely been a dull moment over the last 30 years. There is much I don’t remember, and without sounding like an arse, I often wonder if we can only hold a finite number of extraordinary memories in our grey matter? More realistically perhaps, it is due to the memory loss associated with having M.E for three years, or perhaps a combination of both?

Today is my 52nd birthday, and I have an admission to make; I have never actually known what I wanted to do.  Mine has been an uncrafted career, born from wanting to escape, having an unwavering sense of adventure and accepting opportunities as they came my way, usually without any form of due consideration.

Thirty years ago, it was all about the slopes.  One ski season was planned, it turned into six. Ski passes, ski hire, accommodation and food all perks of the job. Carefree days spent on mountains, nights in dark clubs, drifting from one resort to the next across Les 3 Vallees, Austria and Canada. Summers were spent in the South of France, working as a chef and promoter of scuba diving courses, Greece (yes, I fell in love) and Austria as a walking guide. Freedom from the constraints of anything that could be considered conventional.

Twenty-four or so years ago came London, a proper job, the 9-5, yet still in travel, only now it was luxury travel. My regions, India, Indian Ocean Islands, Sri Lanka, Nepal. Being paid to travel for weeks on end in order to become ‘an expert,’ to stay in luxury hotels and experience the extraordinary. When not traveling, the rest of the year would be spent talking clients into spending more than I’d earn in a year, on a two week holiday, escapism from their daily grind. It was fun, exciting and glamorous and yet, I couldn’t shake the feeling that there must be something more, not materialistically, but something well, just more. It all seemed a bit shallow, what did I really do that was meaningful, who did I really help?

And then fifteen or so years ago, another opportunity to run away presented itself, the opportunity to seek, maybe to find my purpose but at the very least, to have another incredible adventure. At a time when all my friends were married and popping babies out, I fled to India. I told myself it was a sabbatical, six months running a wildlife ecolodge adjacent to a tiger reserve and then I’d be back to the 9-5. Six months turned into six years, then another six, plus one.  I started to discover a whole new India, not just that of luxury and opulence, but the real India, off beat, rural, and it’s people. This was what I’d sought, the truly experiential.

Ten years ago, I was living in Jaipur, by now the absolute spoilt brat of experiential and luxury travel. I was invited the length and breadth of India, from palaces and converted forts, to luxurious tented camps, charming homestays and spa openings. I was treated to classic car rides, rode priceless Marwari horses, rafted white water, invited to royal weddings, slept out under the stars, stayed with nomadic pastoralists, met artisans and weavers and best of all, firmly established my love for India’s natural heritage. It was fabulous and I was incredibly lucky. I was asked to consult for hotels, tour operators and DMC’s, curating experiences, product development, weaving stories.  But still…..

Five years ago, I started to develop this into something that fit in with my desire to be more meaningful. Instead of working with the big companies who operate purely from a profit perspective, I had developed a reputation for seeking the people who also operated from a passion perspective, for who it wasn’t just the client experience that was important, but the locals, artisans, communities, all of whom should benefit from tourism. I also discovered wonderful NGO’s and chose to help them as part of my company’s CSR. I felt that I was on the right track.  My blog was doing well, I’d been invited to write for the Times of India, was invited to speak at events, business was booming and I’d found some good causes to support.

But then there’s the other side of the coin. Running a business anywhere is hard, but operating a business in India is especially difficult.  I came up against some unscrupulous characters, people I’d trusted, who’d initially been a great help but who then either ripped me off, stabbed me in the back or took advantage. One business partner absconded with thousands, my CA played a long con.  It transpired that he’d set up my businesses illegally, had been submitting forged accounts and in doing so, ensured that I had no choice but to become a fugitive from this country that had been my life, soul, passion, career and home for the best part of two decades.

I’d just started to get back on my feet with a project that was perfect for all I’d come to stand for when the pandemic hit. Helping to develop community homestays throughout Nepal, enriching rural communities, empowering rural women, and diversifying the tourism offering.  But travel, as we know, has gone nowhere for two years. I left to come back and keep an eye on my elderly father. Here I was, back home in Yorkshire and floundering.  My colleagues used to joke, ‘Forget GPS, PK has her own PPS.’ But what was I without travel? I had no husband/partner, no kids, no family, no business, no other focus and no sense of purpose.

But the universe works in her own mysterious say. Somewhere in all the above mayhem and chaos, I’d written a book, and had reached out to Gill Laidler, founder of Topic UK & Yorkshire Business Woman which I’d previously written for, and there I reconnected with Mandy Taylor. I saw that she was volunteering with a charity called Focus4Hope, and I started following them. I loved that their food parcels went out with fresh produce, some weeks with books and some weeks with flowers. I contacted her and she invited me down. That was just over 13 months ago. It has changed my life.

2021 was a difficult year for many, it was yet another disastrous year for the travel industry, I was lost and I let people down.  But it was the year I rediscovered the true meaning of the phrase, ‘to be kind.’ Through volunteering I found my tribe, a bunch of incredible people all with a common purpose, all with their own story but all of whom are kind, generous and thoughtful. They all give their time for other people and that is what we have in common. We call ourselves the #focusfamily and we are. There is a constant round robin of checking in on each other over and above the people we support throughout the charity. We care.

In October 2021 I was asked if I could join Focus4Hope part time as their charity development coordinator. Yet another opportunity that I jumped at, though unusually this one meant staying put. It transpires that I have a whole host of transferrable skills relevant to the third sector. This has led to more opportunities with other charities. For the first time in my life, I have no desire to travel. I am incredibly happy here in Yorkshire, I feel not only fulfilled in my work, but also appreciated.  Not just by the #focusfamily but also by the people we support. It has given me a focus and a purpose.

Last Friday I spent an hour talking to a homeless man who was grieving the death of his brother, he was so grateful that someone just taken the time to sit and listen to him. We support people through our food bank, we have the golden oldies who we support through loneliness and isolation. And not a day goes by that as a team, we forget to be grateful to each other and that we are thanked for what we do. 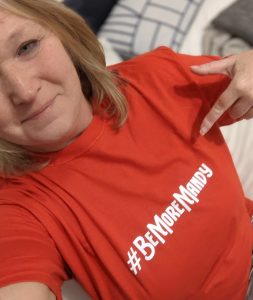 Unfortunately, Mandy passed away in December after a 10-year struggle with cancer. I only knew her for a relatively short time, but she has changed my life irrevocably. The unfailingly positive Mandy always loved my articles and made sure that I was welcomed down at Focus4hope. Her positivity even when she knew she only had weeks left was an inspiration to all that knew her. She didn’t delve into self-pity but, as she did all her life, put others first, made sure everyone else was okay and not only that, set up her legacy campaign to #bemoremandy – offer a smile, buy someone a coffee, grab at life’s opportunities, live for the moment and above all, be kind.

And that is how I came to be sitting, weeping in Dewsbury Minster on Tuesday evening, which also happened to be three months to the day that we lost Mandy. It was the Mayor’s Safer Communities Fund Awards Evening. The room was full of people all of whom are extraordinary, all of whom seek to help the less fortunate, the vulnerable, those in need of support. In addition to being humbled, it made me truly proud to be a part of this sector. 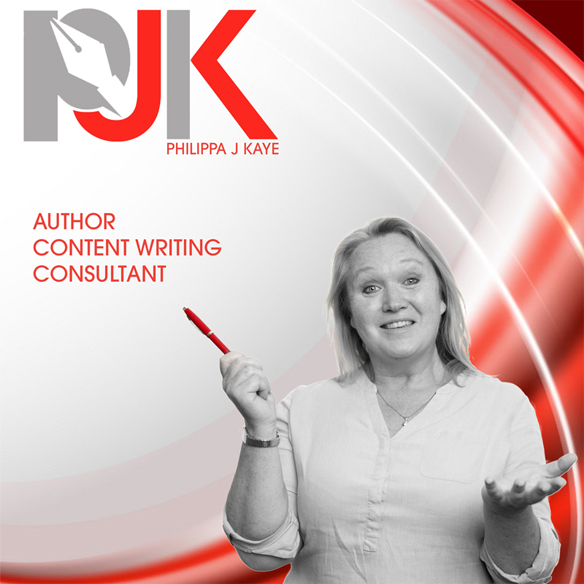